Why do bees swarm?

If you see a big, swirling cloud heading out across the rooftops and trees, it could be a swarm of honey bees. They have left the safety and warmth of their hive and are flying off to find a new home – a hole in a tree, a chimney or an empty hive. It’s an awesome sight to see and hear.

Swarming bees are full of honey – carrying supplies for their new home – so they usually don’t sting. But it’s best to stand well back just in case!

The queen bee and around half the bees in the hive are leaving home. This can potentially be a nuisance for neighbours and the chance of a honey harvest flying away. So you might also see a beekeeper running down the road trying to see where the swarm lands!

Swarming is an important, natural process. It happens when a colony of honey bees splits and the queen takes a large number of worker bees with her in search of a new home. It’s the way they reproduce. As soon as the old queen reaches the new nest site her entourage builds wax honeycomb so then she can lay her eggs and there’s space for pollen and honey stores.

Honey bees mostly swarm early in the season from late April to June. So this is a busy time for beekeepers! 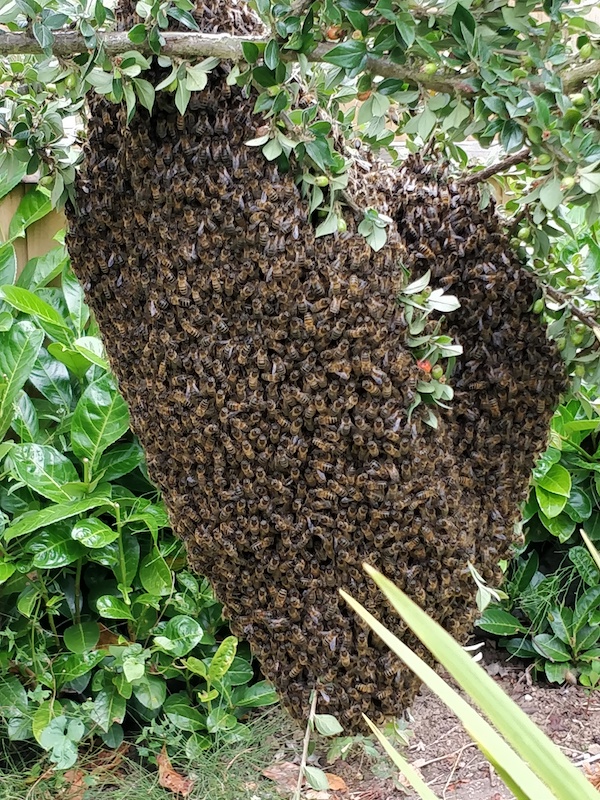 Swarming early in the season gives the bees enough time to set up their new home and gather plenty of stores to see them through the winter. Beekeepers put out bait hives to try to lure a passing swarm. We also ‘artificially’ swarm our colonies which means separating the brood from the queen and flying bees. This splits the colonies and the urge to swarm goes away – usually!

So if you are lucky enough to see a swarm of bees, marvel at this force of nature and then find your local swarm collector here: https://www.bbka.org.uk/swarm#swarmmap

Let us send you the latest news from Let It Bee.

Start receiving our news by signing up today.